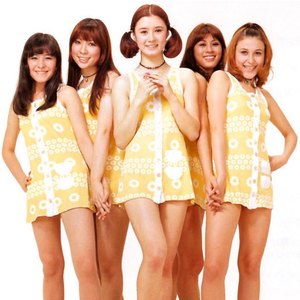 Golden Half was an all-half Japanese creation of Watanabe Productions in September 1970. Their first appearances were to sing and go-go dance on the Fuji TV show BEAT POP. They often sang western pop songs in Japanese and disbanded officially in 1974. The band appeared in the nightclub scenes in Yasuharu Hasebe’s Stray Cat Rock: Sex Hunter where they performed their hit song Kiiroi Sakuranbo (“Yellow Cherry”).

“Golden Half” was recruited as a mascot girls by Nippon Television’s “Drifters Daisakusen”, and they formed in the summer of 1969. At the start of the program, in the fall of the same year, in addition to Yumi, Eva and Maria, there were two other girls, Margaret and Tami. There was also Miki-san, to there were 6 girls total. The program was talking about Katakoto’s Japanese contest and sex appeal.

During their career they almost exclusively covered western songs. This is attributed to the influence of Koji Kusano, director of Toshiba Records, who created the cover pop boom in guiding Saeko Hirota and Kyu Sakamoto, as well.

After the first version of Golden Half disbanded, a second version was launched, also by Watanabe Productions, called Golden Half Special.

This category has only the following subcategory.

Pages in category "Golden Half"

The following 6 pages are in this category, out of 6 total.