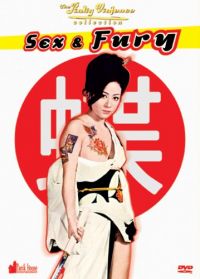 Reiko Ike (池 玲子) born May 25, 1953 in Tokyo, Japan, is a Japanese actress, singer, and entertainer. She is best known for her roles in the genre of action/erotic movies known as pink films through the 70s. Ike made her debut in adult movies at the age of 16. In the mid-70s she became famous for her starring role in the cult movie Sex And Fury.

Ike also released an album of songs in 1971, Kōkotsu No Sekai, for Teichiku records (SL 1375) when Ike was 17. Despite being underage, she appeared topless on the cover. The album features lushly orchestrated enka spiced up by Ike’s breathy speaking/singing, ecstatic moaning and what suspiciously sounds like serious whipping all the way through.

Despite a recent low-quality bootleg retitled You Baby, copies of the album are among the rarest and most desirable of the genre. Ike also recorded two singles, Henshin and Onna No Akai Chi Ga Sawagu, for RCA records in the early 70s, and a more subdued second album Ike Reiko Ga Sasayaku – Yoru No Mood Kayou (Teichiku CF 93 1972).

After a drug-related arrest, and another arrest for illegal gambling in the 1970s, Ike dropped out of the entertainment business.