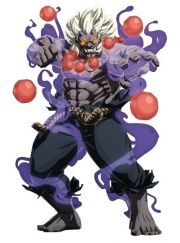 Oni (鬼 Oni?, "Ogre"), also known as Kuruoshiki Oni (狂オシキ鬼 Kuruoshiki Oni?, "Mad Ogre"), is a video game character from the Street Fighter series, first appearing in Super Street Fighter IV: Arcade Edition as a hidden boss. This is the form Akuma takes when he has become one with the Satsui no Hado entirely, completely losing any shred of humanity he had remaining.