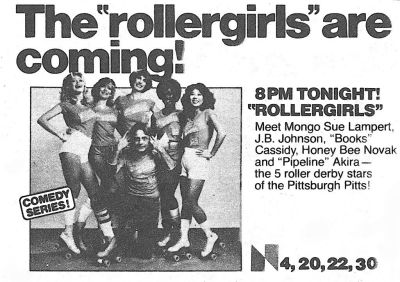 Rollergirls, originally set to be titled as Roller Girls, is a television sitcom that was produced by Komack Company and aired on NBC from April 24th to May 16th of 1978. Upon release of the pilots for both it and Joe and Valerie, NBC had high hopes for the series, as it had followed the trend set by Charlie's Angels where the main cast was composed entirely of women, and incorporating elements of what would come to be coined as "Jiggle Television".

Despite the show promoting the sport of Roller Derby by having a guest appearance by the Los Angeles Thunderbirds (T-Birds), as well as being the television debut of Candy Brown, the series was widely disliked by audiences, critics, and government agencies. It was criticized for not being family-friendly by the Parent Teacher Association, being sold as a "package deal" with Joe and Valerie when the two shows were completely unlike, having terrible humour, weird character names, and overall being unbelievable in nature. After four episodes were produced and broadcast, NBC announced the series' cancellation on May 16th, less than a month after the show's first broadcast.

The series follows the Pittsburgh Pits, a Roller Derby team composed of five members, as is a standard team. The team's members include Mongo Sue Lampert (Rhonda Bates), Mary Francis Johnson (Candy Brown), Selma Books Cassidy (Joanna Cassidy), Honey Bee Novak (Marcy Hanson), and Pipeline (Marilyn Tokuda). Together they train and compete, but often personal matters get in the way of things, and they find themselves in comedic situations.

The intro credits, as well as a clip of the show, have both made their way online. However, no episodes in full have surfaced either on the internet, or in any notable archive. However, a script for the episode "Battle of the Sexes" is currently held at the University of Illinois.

The series features the exploits of a fictional all-female roller derby team, the Pittsburgh Pitts, owned and managed by Don Mitchell (Terry Kiser).