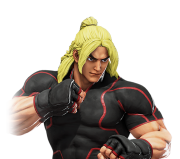 Ken Masters (ケン・マスターズ Ken Masutāzu?) is the deuteragonist of the Street Fighter series, first appearing in the original Street Fighter. Similar to his longtime best friend and rival Ryu, Ken's goal is to test his power against many different fighters and strives to become stronger, but holds more restraint due to not wanting to jeopardize his family life.