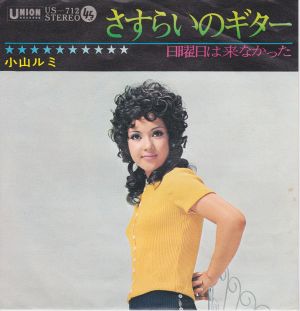 We catalog artifacts from the greater Japanfornia cultural diaspora. For the most part we are most interested in things originating in either Japan or California and make appearances in the other area of the country.

Honestly, it's mainly a wiki for stuff that we find Japanesey, Cool Japan, Nikkei AF like Japanese Comic Book Characters and Japanese in American Pop Culture.

We tend to follow rabbit holes for Japanese and Japanese American character actors from the 70s and 80s.

Check out some of our Collections.

George Takei and Pat Morita became famous for supporting roles in Star Trek and Happy Days. In 1976, Morita starred on the first American sitcom centered on a person of Asian descent, Mr. T and Tina and went on to become widely known as the mentor Mr. Miyagi in The Karate Kid movies of the 1980s. Other Asian Americans from this period include Jack Soo of Barney Miller.

Amy Hill has since been a mainstay of U.S. television for years as a recurring/character actress, some of her most notable roles include, Mrs. DePaulo on That's So Raven, Mama Tohru on Jackie Chan Adventures, Mrs. Hasagawa on Lilo & Stitch: The Series, Ah-Mah Jasmine Lee on The Life and Times of Juniper Lee, Judy Harvey on Enlightened, Mah Mah on American Dad!, Dr. Wagerstein on UnREAL, and now Lourdes Chan on Crazy Ex-Girlfriend.

Sho Kosugi the third lead and villain in Enter the Ninja (1981), he was given the solo lead starring role as the hero in the follow-up film Revenge of the Ninja (1983).

Gregg Araki is an influential American independent filmmaker of Japanese ancestry, who is especially noted for his often playful, punk-influenced work dealing with young, often gay, members of generation X trying to define themselves in the wake of the AIDS epidemic, rampant consumerism, and childhood trauma. His films such as The Doom Generation, The Living End and Nowhere were seen to exemplify the alienation and hedonistic abandon of their times, while his 2004 film Mysterious Skin, featuring Joseph Gordon-Levitt in a dramatic role, was highly acclaimed for a dark and realistic portrait of the effects of child sexual abuse.

Allegiance, which ran on Broadway from October 2015 to February 2016, is set during the Japanese American internment of World War II (with a framing story set in the present day), and was inspired by the personal experiences of George Takei, who stars in the musical along with Lea Salonga.

Larry Hama (/ˈhæmə/; born June 7, 1949) is an American comic-book writer, artist, actor, and musician who has worked in the fields of entertainment and publishing since the 1960s.

During the 1970s, he was seen in minor roles on the TV shows M*A*S*H and Saturday Night Live, and appeared on Broadway in two roles in the original 1976 production of Stephen Sondheim's Pacific Overtures.

He is best known to American comic book readers as a writer and editor for Marvel Comics, where he wrote the licensed comic book series G.I. Joe: A Real American Hero, based on the Hasbro toyline. He has also written for the series Wolverine, Nth Man: The Ultimate Ninja, and Elektra. He co-created the character Bucky O'Hare, which was developed into a comic book, a toy line and television cartoon.

In The New York Times Magazine in January 1966, Success Story, Japanese-American Style, the term "model minority" was coined by sociologist William Petersen. It was used in order to describe Japanese Americans as ethnic minorities who, despite marginalization, have achieved success in the United States.

We are also all very curious about the Oriental riff. We should investigate. The Japanese 70s film genre Category:Pinky Violence is either problematic, cathartic or cool. We should do a big section on Usagi Yojimbo: 165 issues. Published by Dark Horse Comics. Started in 1996.

Halvsie's mission is to find "All the Hāfu" and as part of that we are collecting the basic biographies of as many notable hāfu as we can find. This is our wiki, we have a collection of hāfu videos, interviews and links to other articles at our primary homepage halvsie.com and we also host a Social Network for hāfu members at social.halvsie.com.

To help support our efforts, please check out our Japanifornia Shop for Japanese-inspired t-shirts, stickers and other stuff from all of these various collections. Have fun!