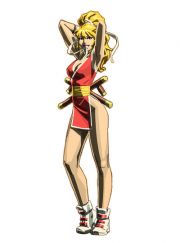 Maki Genryusai (源柳斎 真紀 Genryūsai Maki?), more commonly known simply as Maki (マキ Maki?), is a video game character who debuted in Final Fight 2. She would later return in the crossover game Capcom vs. SNK 2 before appearing in the Street Fighter series starting with Street Fighter Alpha 3 Upper. She is a speedy ninja along the same lines as Guy, and sister to his fiance, Rena.