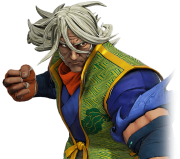 Zeku (是空 Zekū?) is a video game character from the Street Fighter series, first appearing in Street Fighter Alpha 2 as a non-playable character before making his playable debut as the final fighter of the second DLC season of Street Fighter V.[5] Zeku was formerly the 38th grandmaster of the school of Bushinryu Ninjutsu, after being succeeded by his pupil Guy, he set out on a journey of self-discovery.