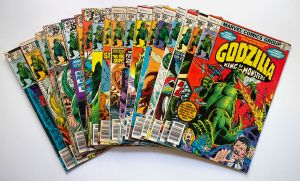 Other Things to Reserach

In January 2022, Legendary announced that Apple TV+ had ordered an untitled live-action series featuring Godzilla and other Titans, with Chris Black serving as showrunner. Black and Matt Fraction will serve as co-creators and executive producers.

This category has the following 2 subcategories, out of 2 total.

The following 29 pages are in this category, out of 29 total.