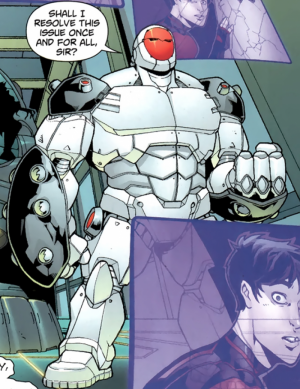 Toshiro Misawa was nicknamed Fuji due to his Japanese heritage and his uniquely large size. Early in his life he attempted to become a sumo wrestler, but due the emergence of his powers and the side effects he quit his career. His body started to wither away and despite his father’s vast wealth he would have died if not for Stormwatch. Lucky for him, his powers had not fully awakened yet and before they did, the Stormwatch scientists were able to design and build a containment suit that would keep his form together. He soon became a field member after the presumed deaths of many former members. His situation is very tough on him emotionally, but he usually shows a very pleasing face and he often brags about how wonderful his containment suit looks.

Fuji makes his DCU debut (after the Wildstorm Universe was integrated with the mainstream DCU post-Flashpoint) as a soldier working for NOWHERE in Superboy #7.