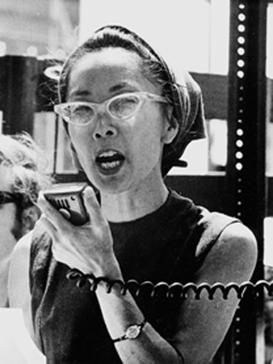 Yuri Kochiyama (河内山 百合子 (ユリ・コウチヤマ), Kōchiyama Yuriko, formerly Mary Yuriko Nakahara; May 19, 1921 – June 1, 2014) was an American civil rights activist. Influenced by her Japanese-American family's experience in an American internment camp, her association with Malcolm X, and her Maoist beliefs, she advocated for many causes, including black separatism, the anti-war movement, reparations for Japanese-American internees, and the rights of political prisoners.

Mary Yuriko Nakahara was born on May 19, 1921, in San Pedro, California, to Japanese immigrants Seiichi Nakahara, a fish merchant entrepreneur, and Tsuyako (Sawaguchi) Nakahara, a college-educated homemaker, and piano teacher. She had a twin brother, Peter, and an older brother, Arthur. Her family was relatively affluent and she grew up in a predominantly white neighborhood. In her youth, she attended a Presbyterian church and taught Sunday school. Kochiyama attended San Pedro High School, where she served as the first female student body officer, wrote for the school newspaper, and played on the tennis team. She graduated from high school in 1939. She attended Compton College, where she studied English, journalism and art. Kochiyama graduated from Compton in 1941.

Her life changed on December 7, 1941, when the Japanese Empire bombed Pearl Harbor. Soon after she returned home from church, FBI agents arrested her father as a potential threat to national security. He was in poor health, having just come out of the hospital. The FBI was suspicious of photographs of Japanese naval ships found in the family home and his friendship with prominent Japanese, including Ambassador Kichisaburō Nomura. Nakahara's six-week detention aggravated his health problems, and by the time he was released on January 20, 1942, he had become too sick to speak. Her father died the day after his release.

Soon after the death of her father, United States President Franklin D. Roosevelt issued Executive Order 9066, which forced out approximately 120,000 people of Japanese ancestry from the Pacific coast and interned them at various camps across the United States. Yuri, her mother, and her brother were "evacuated" to a converted horse stable at the Santa Anita Assembly Center for several months and then moved again to the War Relocation Authority internment camp at Jerome, Arkansas, where they lived for the next two years. While interned, she met her future husband, Bill Kochiyama, a Nisei soldier fighting for the United States. The couple married in 1946. They moved to New York in 1948, had six children, and lived in public housing for the next twelve years. In 1960, Kochiyama and her husband moved their family to Harlem and joined the Harlem Parents Committee and the Congress of Racial Equality (CORE).