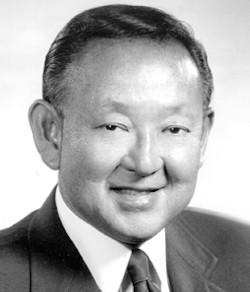 �Lawrence Kiyoshi (Larry) Shinoda (March 25, 1930 – November 13, 1997) was a noted American automotive designer who was best known for his work on the Chevrolet Corvette and Ford Mustang.

Shinoda was born in Los Angeles, California, to Japanese Issei. Shinoda's father, Kiyoshi, came to the US when he was 12 years old and earned an electrical engineering degree from UC Berkeley. His mother, Hide Watanabe, a graduate of Woodbury College, was born in 1906 and immigrated to the US with her parents when she was less than 1 year old. His parents met and got married at the Union Church of Los Angeles, where they were both members. Aiko (Grace), Larry's sister, was three years his senior and similarly creatively minded.

Shinoda was raised in Southern California, where he first began to hone his artistic skills in elementary school. Kiyoshi passed away when Larry was three. in 1942, under U.S. Executive Order 9066, he was incarcerated with his sister, mother, and maternal family (an uncle, two aunts, and a grandmother) and sent to the Manzanar "War Relocation Camp" in California. He was in the 7th grade and solely spoke English when he arrived at Manzanar; he had never gone to a Japanese language school, according to his internee data file.

He sneaked through the barbed wire to the camp to play and fish. At the prison camp, he created his first functional design, a pair of reclining back chairs for his mother and grandmother that won the admiration of other prisoners. His paternal grandpa owned a farm in Grand Junction, Colorado, and the family relocated there in the spring of 1944 to assist him.

Shinoda went to Eagle Rock High School in Los Angeles and obtained an associate's degree from Pasadena City College while working for Weiand. After graduation, he joined the Air National Guard and served for two years, sixteen months of which were spent in Korea. Upon his return, he enrolled in the Art Center College of Design in Los Angeles before it relocated to Pasadena, but he "negotiated" his way out before receiving his diploma because he had been informed (incorrectly) that attendance was optional if he turned in the assignments.

As a young man in Los Angeles, he built custom cars and raced them on the streets. One of the first cars he built was "Chopsticks Special", a 1932 Ford deuce coupe equipped with a 298 flathead V8, which he acquired from a coworker at Weiand, Bob Lee. Shinoda sold the deuce coupe in 1953 to Don Montgomery and built a 1929 Ford roadster; the coupe has since been identified and restored. His '29 Ford, named "Chopsticks Special IV", was powered by a flathead V8 with Ardun OHV heads. Shinoda won the "A" Hot Roadster class at the first NHRA U.S. Nationals held in Great Bend, Kansas with Chopsticks Special IV in 1955. Shinoda sold the '29 Ford as parts to his partner in the car, Jack Powers, in 1956.